This is Mosaic Kids

I love that I constantly have to be on my toes. I always have to have another game or activity in my back pocket… And I love that I can be over the top—the goofier and sillier, the better. 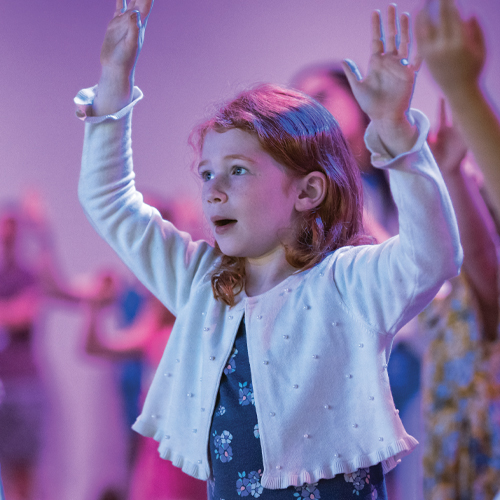 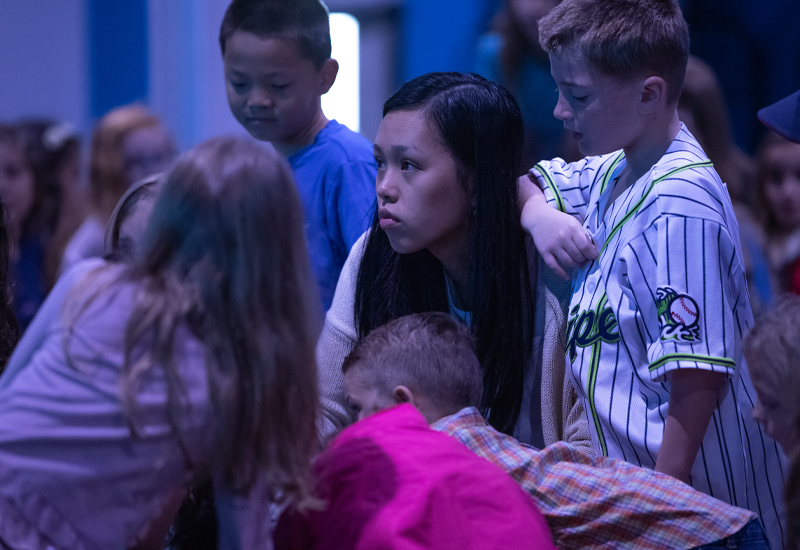 It’s in this phase that Bible stories really come alive and are no longer just stories. We get to watch our Kindergarten through 4th graders grow in understanding of everything they’re learning, and with that new depth, start to make decisions informed by biblical truths and faith.

Kindergarteners don’t have huge attention spans, so we utilize the Garden to keep them engaged continuously. In it, you won’t find many tables or chairs, but you will find lots of empty space. Throughout a Sunday gathering, it will transform from a game, puzzle, and lego den to an open worship space for dancing and singing to Noah’s ark or Peter’s fishing boat during live-action storytime to a spread of small groups where they’ll do hands-on activities that help them explore the themes of the Bible story they just heard. These games and activities grow with them throughout the year, looking very similar to what they experienced in Mosaic Little Kids when they first enter but eventually mirroring what they’ll be doing in a first-grade small group.

Just for now, in our limited capacity, our kindergarteners are learning and playing alongside our 1st through 4th graders in The City. We’re looking forward to reopening The Garden space later this year!

We want The City to be a place kids beg their parents to bring them to every week. So, we put hours upon hours of time and creativity into bringing it to life! Every month the stage gets decorated in a big way to help illustrate the current curriculum. It’s from here that kids experience God’s word in action through the Bible. Our goal is to share its stories with simplicity and nuance; simple enough for our first-graders to understand and detailed enough for our fourth-graders to discover something new.

Every gathering follows an arc of high-energy games, worship, and storytelling in our large-group time that eventually resolves into small groups where deeper exploration, life application, and Scripture memorization are encouraged. In these small groups, kids find a fun and safe space to be themselves as they interact and connect with one another and their leader, experiencing being an active part of a biblical community. 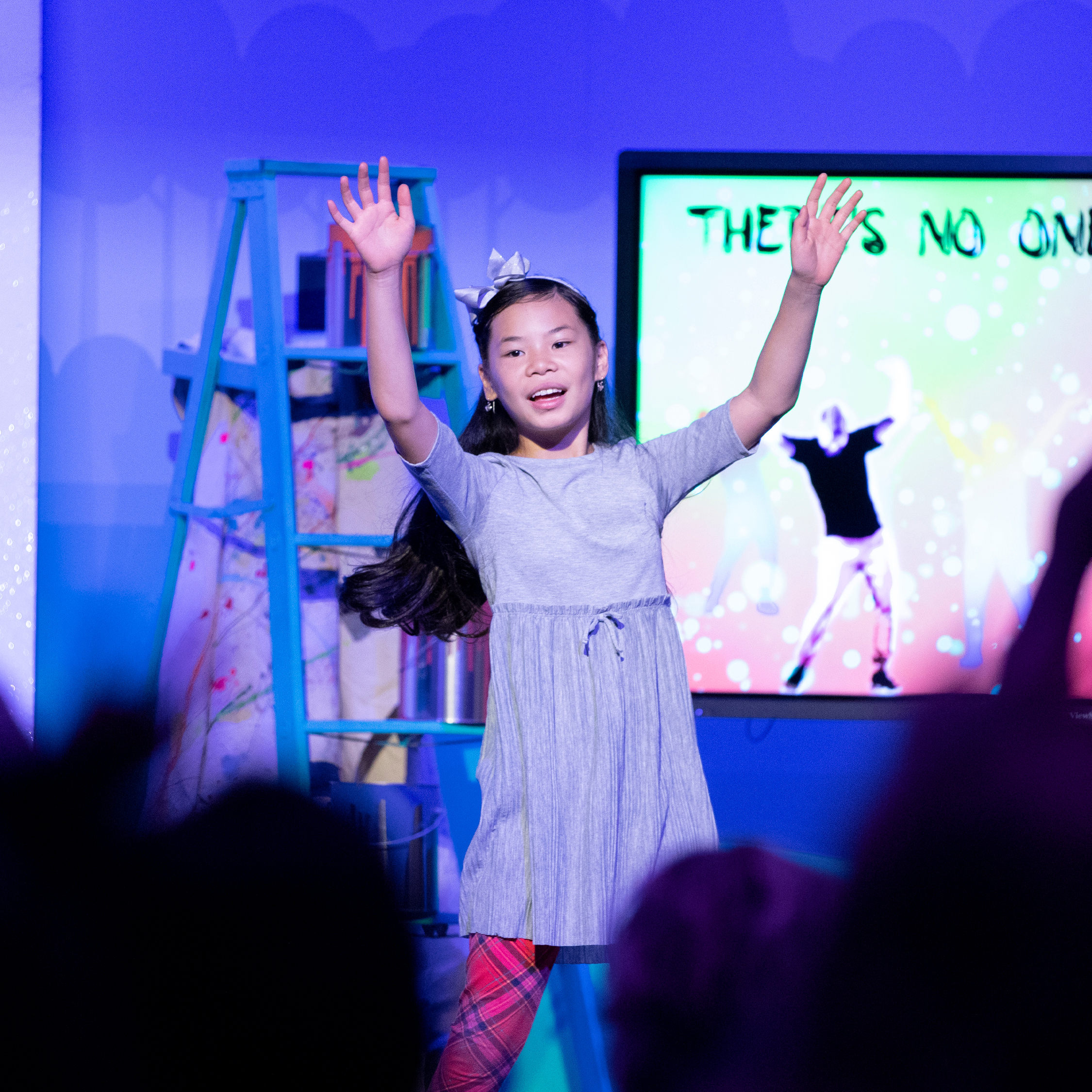 A Note to Parents

When Adam and Eve decided that their way was better than God’s way and broke God’s rule, they changed the relationship between God and His creation. When once everything and everyone could be in the presence of God, now we were at odds with God. God could have done anything He wanted, including wiping us out and starting over. But instead, God decided to make peace with us. Ultimately God did this through His Son, Jesus.

When Jesus rose from the dead, He paid the price for everything that was wrong and unfair in this world. Because of Jesus, we can have peace. We don’t have to get even. Instead, we can reflect the character of Christ by caring for others and making peace.

We kick off the month with something Paul writes about Jesus in Colossians 1:20 and John 20:1-18. On Easter Sunday, we want to make sure that kids know how they can have a relationship with Jesus. Throughout the entire Bible, we see God’s plan to make peace with us. In the second part the Colossians verse, Paul reminds us that it’s through what Jesus did on the cross that the world can be right with God again.

Bottom Line: God made peace with us. God went to great lengths to fix what was wrong between us and Him. When God looked across humanity and saw the brokenness of our relationship with Him, He proved He cared about us by sending Jesus, His only Son to die—to build a bridge and resolve the conflict that existed. Now, Jesus is alive, and we can have a relationship with God that lasts forever.

In week two, we look closer at something else Paul wrote in Colossians 3:15: Let the peace that Christ gives rule in your hearts. As parts of one body, you were appointed to live in peace. And be thankful, (NIrV). Because Jesus made peace with us, we can turn around and show that same peace to others.

Bottom Line: We can make peace with others. When God made peace with us through Jesus, God showed us that peace with others is possible. This doesn’t mean that it will be easy, but peace is worth the effort it takes to make it. We pray that kids will discover the ways they can live at peace with the people in their life.

For week three, we head back to Genesis 26:1-6, 12- 22, 26-31. Isaac moved to a region where he reclaimed the wells that had belonged to his father, Abraham. For years no one had cared about the wells until they were reopened, then everyone started fighting over them. Instead of fighting, Isaac decided to give away the wells in order to make peace. Isaac simply walked away from what was rightfully his. And by walking away from the fight, those people changed their opinion about Isaac, and decided to trust him.

Bottom Line: You can show you care about others by walking away from a fight. Sometimes creating peace with someone means walking away even if we’re not wrong. Often it takes a stronger person to have the self- control to walk away. We pray that kids will learn how they can choose peace when they want to argue and fight.

We finish the month in 1 Samuel 25:1-35, where we find a story about woman named Abigail, but it starts with King David. He was furious with a man who mistreated his soldiers. He decided to get revenge, until the man’s wife, Abigail, intercepts him with gifts to make peace and apologizes. Her peacemaking skills stopped something that could have been horrible. Even though she was not responsible for her husband’s offense, she realized she could play a role in making peace.

Bottom Line: You can show you care about others by being part of the solution. Peace is often about helping stop an argument before it can escalate into something worse. Acting as a peacemaker between others will take time and energy, but God can give us the strength to help others make peace. Sometimes our outside perspective is what someone might need to see a peaceful solution.

In Every Moment By, Through, & For Jesus

Phase Two in The Garden & City

In 2018 we entered a new chapter at Mosaic with the Every Moment initiative. A key part of this next step in Mosaic’s story includes a buildout of our Winter Garden Campus, utilizing the building’s unused expansion space in a plan we call Phase Two.

What does this mean specifically for kids in The Garden and City? Two new, larger gathering spaces—a reimagined Garden and City (see concept art below), both of which can accommodate more kids, host more interactive stage activity, and, hopefully, immerse them in an environment of fun and wonder as they experience the gospel. We’re very excited about the addition of an indoor playground that will sit between these two new spaces.

The theming of Mosaic Kids as a town—with a park, a garden, and main street—is to help show our kids that God is powerfully present with us everywhere we go.